The last two weeks of political convention fervor have had their fair share of excitement, drama, anger, and celebratory moments, which are all bathed in political rhetoric.  Anyone who knows me well knows that I get a little excited when in the midst of an election season.

So much so, that when out with some friends, we were able to convince the nice waitress to let us take control of one of the TVs and switch it from a European soccer game to the convention.  A room full of 15 women  weren’t about to miss the live acceptance of the first woman to receive the nomination of a major political party.  Despite one’s political party inclination and thoughts about Hillary Clinton, it was a momentous historical event for American women and girls.

Additionally, this week I was away one of the nights of the convention and as my husband and my boys were watching the speeches my husband posted the following Facebook post.

You see,  Liam and I have been watching both conventions (Republican and Democratic) the last two weeks and I’ve been answering questions ranging from the second amendment, why some people are upset about increased immigration and why others embrace it,  and how people fall along different parts of the political spectrum. I do this for many reasons, but primarily because I want to carry on the civic education that I received as a child to my own children.

When thinking about my own political education, I remembered that it began at home.  I 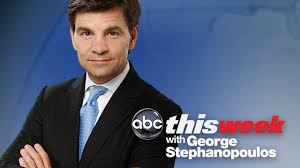 remembered that every Sunday morning I’d watch Meet the Press and This Week with my mom.  Even now, my boys know that we are going to stop their cartoons on Sunday morning so we can watch “George.”

I also remembered how in our house other TV programming stopped as we watched the conventions, both Democratic and Republican, to hear about what our political leaders were thinking.  I remembered how on every election day my mom would take me with her to the voting booth to emphasize the importance of civic participation. I remembered how excited I was when I went to vote for the first time at the age of 18.

While my civic engagement began in the home, it really took root in school.  I will never forget my 8th grade history teacher, Mr. Johnson, in Gardner, MA who would hold up a copy of the Constitution in his hand and say the following in the thickest of Massachusetts accents:  “You guys go around saying ‘this is awesome’ and ‘that is awesome,’” and then with a long drawn out pause, he would say “NOTHING IS TRULY AWESOME, EXCEPT FOR THE CONSTITUTION.” He told stories of political leaders who kept a copy of the constitution in their pocket to remind them of what was important about our nation and laws.

At the same time, I was able to be part of the Gardner Middle School History Club, where Mr. Goguen would take us on adventures throughout Massachusetts to study our local history and bring it to life.   It was with this group that I saw for the first time Plymouth Plantation, the Freedom Trail, and the battlefields of Lexington and Concord.  As a junior and a senior, I had Ms. Pisaruk, who I consider to be the most influential teacher in my life because she had the perfect balance of incredible content knowledge and enthusiasm about history and government, alongside high expectations for her students to be critical consumers and analysts.  It was because of her passion and inspiration that she instilled in me that I could make a difference in this world that I majored in government and legal studies and entered education.

The Need for Civic Education Today

In the midst of this current election, the need for comprehensive civic education is needed now more than ever.  In a world of a 24-7 news cycle, alongside Facebook feeds and Twitter discourse, to be an actively engaged civic participant, one needs to learn how to become a critical consumer of information.

The Massachusetts Board of Education has also recently recognized that as a result of our age of accountability with ELA and Math testing, we have gone too far away from civic education.   Therefore, it approved this year the following definition of College and Career Readiness and  Civic Preparation:

Key knowledge, skills, and dispositions that students should possess to be prepared to engage as active citizens include:

It is great to see Massachusetts moving in the right direction to engage in a review of outdated social studies standards, to set up a committee to study civic engagement, but these bureaucratic processes will take time.  However, until the standards change,  educators face an immediate challenge to guide our students each day to make sense of our political environment, with limited classroom time for instruction and resources.

Therefore, as we enter our classrooms this September with one of the most contentious presidential election seasons we have seen in our lifetime, we should consider the following questions:

The following list can provide you with more information to support you in your work to increase civic discourse and education in our schools:

Be An Educational Change-Maker

Welcome to the "Be the Change" blog. This will provide a compilation of videos, links, and reflections on best practices in education.